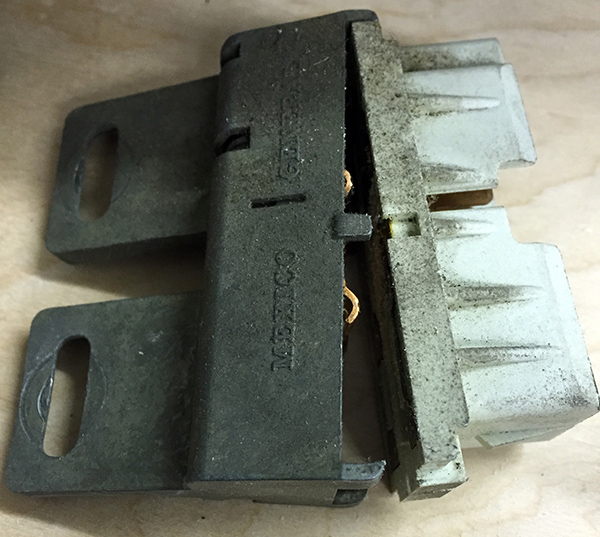 The F250 Lariat that I bought to haul crap around (for a $1000) came with a steering column whose tilt steering was broken.

The truck is tall enough that whoever owned it before me would use the steering wheel to pull themselves into the drivers seat.

The truck developed this problem where when I turned the wheel the truck would stall. Disconcerting to say the least when you are on the road with traffic behind you. So I stopped driving the truck and started looking for the problem.

After some troubleshooting and getting some understanding that the key is _not_ the ignition switch I discovered the problem.

There is a mid-column switch on these models and there is an actuator (metal rod) that runs from the key module down to the switch. The actuator was not broken (a very common issue with these models).

Because the tilt steering was broken the actuator rod would move right to left. Over time this caused the mid-column ignition switch to separate. This separation then caused my intermittent stalling. As the wheel turned, the actuator moved and pushed the ignition switch apart just enough to cause the vehicle to quit.

Replace the mid-column ignition switch and the problem is solved for now. It’s easy to replace the switch.

Take the negative cable off the battery. Remove the plastic covers to the left and right of the steering column (1 screw plus some careful tugging), mark the position of the switch on the column and remove the electrical connector to the switch. Remove two bolts holding the column up and drop the column. Note the way the actuator is coming into the switch, undo the two nuts holding the switch to the column and removed the old switch. Reverse the process and make sure the actuator is in the right place. and put the new switch in place. I tested the key/actuator combination before putting the column back in place. $12 and 30 minutes later and the problem is solved.

I’ll have to think about fixing the tilt steering.

I dug around on the internet forever looking to solve the problem but I didn’t find this specific issue. Hope this helps someone.

Another year…another pic of Disco Santa!

The very real dangers of owning a Jeep….getting

Looking out the back door this morning.

Molly and I at Ciara and Robbie’s wedding. Beaut

Michigan in the Fall

That’ll do Peaches, that’ll do. Storing up a l

Emmett wants to use the stand-up paddle board. Coo

Grout this and tiling will be done in this room. O

A fledgling Oriole and its Mom.

Got back from Portugal. Local wildlife missed us.